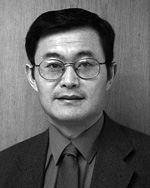 Ph.D., University of California at Riverside, 1992

Jingsong Chen was born and raised in Yizhen City, Jiangsu Province, China. He received his bachelor’s degree in Chinese language and literature from Yang Zhou Normal College and his Master of Arts degree in Chinese theater from Beijing’s Chinese Academy of Arts. He came to the U.S. as a graduate student in 1988 and earned his Ph.D. in comparative literature from University of California, Riverside in 1992.

Dr. Chen’s research focus is East-West comparative drama. He has published a number of articles on issues of comparative drama, the aesthetics of traditional Chinese theater, and the nature and function of language. He is also a prolific writer in Chinese essays and short stories, and has authored two collections of personal essays, Qing Shan Shao Nian Shi [Early Years Beyond the Green Hills] (Chicago: North American Chinese Writers’ Association, 1997) and Kafei Yu Cha [Coffee and Tea] (Los Angeles: Evergreen Publishing, 2003).