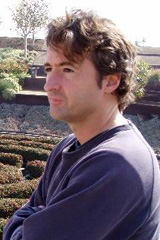 Ben King received a B.A. in Classics from the University of Virginia (1990) in Charlottesville, not far from the picturesque Shenandoah Valley where he grew up. Later, he went to New Jersey and earned a Ph.D., also in Classics, at Princeton University. After teaching for a year at his alma mater (University of Virginia), he was appointed lecturer in Classics at far-off UC-Riverside, so he happily packed up his car and drove to California. Since 1997, he has taught Ancient Greek and Latin, Mythology, Word Power, and a variety of courses in Classical literature.