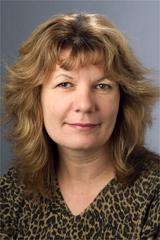 Heidi Waltz’s areas of instruction are linguistics and German. She embarked on her undergraduate studies at Heidelberg University, Germany, and completed her graduate work at UCLA after a DAAD scholarship brought her to the United States. Her main interests are in comparative-historical syntax, language acquisition, and heritage language learning. She has lectured and published on issues in Germanic syntax, historical dialectology, and heritage language acquisition.